After doing my Trainwreckish TMC1 with a single ended 6F4P (Russian ECL84/6DX8 equivalent) I wanted to try a push pull amp using 2 6F4Ps and have the included triodes be the LTP phase inverter. I thought for a while about what sort of amp to do but decidied to just go for broke and try a Marshall Plexi type amp. I figured a 4 or 5 what amp that could really get Plexi tones at a reasonable volume would be really cool.

When planning it out I decided to go by the theory that if you want big amp sound you have to design it pretty much like a big amp. So this amp is pretty much the full plexi circuit which had the added benefit that if it sounds bad I could switch it over to different power tubes fairly easily.

The first design went pretty close to a 1987 Marshall but it didn’t quite do it for me. The bright channel was too bright and the bass channel was too muddy. I did some tweaking until I finally took a look at the Mark Huss 6V6 Plexi schematic and I figured it would take care of what I didn’t like in my design. So a few cap and resistor changes later I pretty much copied the 6V6 Plexi schematic. It really did the trick.

Where this design differs from the 6V6 Plexi is, obviously, the power tubes. The 6F4P are very sensitive and overdrive very easily. In the TMC1 I have a voltage divider before the power tube but in this one I used split load plate resistors on the phase inverter. I got this idea from katopan (Craig), on the wattkins.com forum. He uses split load plate resistors on the PI in his excellent Thrifty Trainwreck design. BTW, if you are interested in amp design his website is definitely worth a visit. I used a 22k/82k and that seemed to work well in getting the right amount of drive to the power tubes.

For transformers I used an Edcor XPWR024 for the PT and a MPS OT15PP for the output transformer. That’s under 50 buck total for iron. The pair of 6F4Ps need about a 16k primary so I am using a 8ohm speaker in the 4ohm tap to bring the primary up. I’m using the 7k so the output tubes are seeing 14k which I preferred the sound of over 16k. I also used a Weber choke (not in the picture below).

The chassis is a 16x8x2 Hammond that I painted gold. My plan is that someday I’ll get a black cab for it or I might get one of those Hammond cages and just paint that black.

As far as how it sounds, even after reducing the drive to the power tubes it still overdrive fairly easily. I didn’t build this to have a clean amp so I’m not complaining. This amp does a good job of getting cranked up Marshall tones at a reasonable volume. Though 5 watts can still be loud, it’s something that can be used at home without too much trouble. 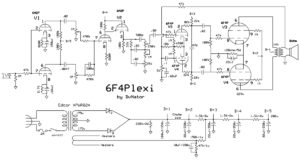 And finally a couple clips:

UPDATE:
I recently made a few changes. I went to fixed bias, simplified the power rail and did a couple tweaks around the PI. 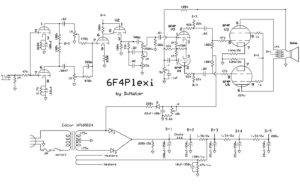