This one is a rewire of my Trainwreck based Gimlet amp that I built years ago. It’s very similar but I went from 6F3Ps to 6F4Ps. Even though a number went up the power output went down.

I’ve come to be interested in 6F4Ps since I’m not gigging anymore and trying to keep up with a drummer. The 6F4Ps are a tube with a triode and pentode output section in each bottle. the 6N6Ps get close as far as low watt output tubes but IMHO there is no substitute for a pentodes. The 6F3Ps are good to but they put out about twice what the 6F4Ps put out.

The main issue with using the 6F4Ps as output tubes is that they are so sensitive so you have to accommodate that. That mean reducing the gain to the tube. The way I like to do that is in the coulpers between the PI and output tubes use larger caps and smaller resistors. This way knee of the high pass filter can stay about the same but the dive is decreased. On top of that you can take the smaller resistor and make a voltage divider out of it. It’s my experience that voltage dividers using smaller resistors keep the high end better because of avoiding the miller effect. So in this amp I’m using .1uF couplers to the power tube and a 33k/10k voltage divider.

The preamp and phase inverter are pretty much taken directly from the Liverpool. I messed around with some more Express like values but I thought it was overkill and the amp seemed more like a one trick overdrive pony. I added what I call a Drive control after the second gain stage. It’s a 50k pot with a 15k resistor between the pot and ground. With the pot all the way up I basically just have a 65k reference to ground which is close enough to the Liverpool’s 68k. (I didn’t have a 18k resistor). Turning the pot down mellows out the amp by introducing a voltage divider there. It’s not complete Trainwreck authenticity but it makes the amp much more versatile. The drive control is on the back.

I’m running the power section at lower voltages than I have in the past. This came from work katopan, a member at wattkins.com, did regarding 6F4Ps. He found that running them around 208vdc and biased hot got good results so that’s what I’m doing. They do sound good! I then, decided I like the tone better with out the bypass cap on the output tube cathode. It dropped the output, maybe a bit but not much, but the amp sounded much warmer and better to me. The rest of the power supply is most just trying to keep the voltages up somewhat for the preamp. 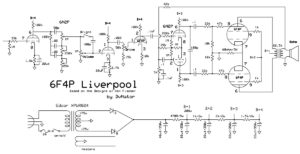 Below is a video clip below. It’s just the amp played with a Les Paul and then a Telecaster. No pedals and the speaker is a 2×12 with a 70th Anniversary Celestion and a WGS Retro 30. Drive control is all the way up.