I decided it was time to build a real high gain amp. I had built some fairly high gain amps in the past but I wanted to try 4 gain stages and a cathode follower. I also wanted to have some sort of clean channel. Other goals for the amp was to use just three preamp tubes, 6N2Ps and two 6L6GC power tubes. I also wanted to keep the costs down.

I spent some time on YouTube listening to clips and, to be honest, many high gain amps sounded like a bunch of angry bees to me. I finally decided that a Soldano SLO was clearly the best sounding so I based my build on that.

I always like to use parts I have in my garage for builds rather than have to buy things so i took a quick inventory. I had purchased a XPWR005 Edcor power transformer a while ago with the intention of using it in a 6L6GC build so that was an easy decision. Finding a suitable output transformer was a bit more tricky. All I had were either suitable for a pair of 6V6s or EL34s. I had the PT and OT from an Ashdown Fallen Angel which is a EL34 amp. I noticed that the OT had a 3.2k primary and multiple output taps so I found I could plug my 8 ohm speaker into the 4 ohm OT tap and end up with a 6.4k primary. Maybe not ideal but close enough.

The phase inverter and power section was going to be fairly generic. 10k/470R in the PI and .047uF output tube couplers. The preamp was were it was going to get creative. One preamp tube was going to be the phase inverter so that left 2 tubes or 4 triodes to the preamp. I went with a MOSFET source follower to drive the tone stack instead of adding another tube. The rest of the preamp is pretty close to a SLO. I did go from a 1uF bypass cap on the last triode to a 2.2uF for a little more low end.

Getting the clean channel was a bit of a challenge. I didn’t want to add another tube so my first try was adding a switch that basically bypassed the middle two gain stages and defeat the master volume. I also increased a cathode bypass cap on the last stage to increase the volume a little. This arrangement sounded really good at low volumes but when you turned it up it got flubby on the low end and didn’t really stay clean.

I figured the best clean channel would be something like a blackface Fender with the tone stack between two gain stages. I knew I couldn’t do that without major reworking so I came up with an alternative. With a DPTP switch I would still bypass the two middle stages but with the other half I would defeat both the master volume and the tone stack. Then to have something simulating a Fender tone stack mid cut I turned the treble peaking circuit, located after the first gain stage, into a part time fixed mid cut using a bridged T circuit. So the switch, in clean mode disconnects the tone stack and MV from ground and connects the mid cut capacitor to ground instead. This works really well and gets me a really nice clean sound but with no tone controls.

Then I did some tweaking with the power supply voltages. My amp, overall is about 50v lower than a SLO but I really like it. Maybe it’s a little more “brown” sounding. 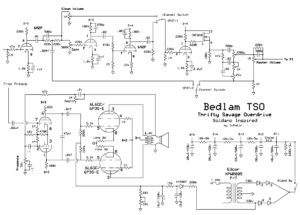 From humble beginnings…It was a tight fit getting everything on the board but It worked with a couple eyelets left over. Also it’s nice and quiet (when it needs to be). 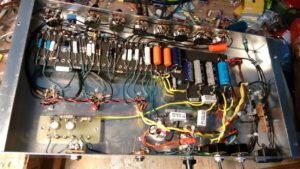 This clip has much better video but not as good audio. It was recorded with an iPhone. It starts with the clean channel and then goes dirty.