This amp came from the idea of trying to capture some Trainwreck Express/Liverpool tone in a simpler, 4 tube package. Granted, a Trainwreck isn’t that complicated a circuit to begin with but this was an attempt to strip it down even more.

This effort began over a year ago on Wattkins. The original concept involved using the original 5E3 PCB board that was available on Wattkins.com. Using that at board involved using a cathodyne PI. After weeks or months of trying I never got anything I was really happy with. I’ve found if I spend too long trying to tweak an amp then the basic concept is just not working. So that project eventually evolved into doing Park LE build.

So after not doing anything amp related for a few months I decided to revisit the simpler Trainwreck concept but in a different way. I ditched the cathodyne inverter and went with a long tailed pair (LTP) instead so that left just one dual triode for the preamp. I think the 10k, 3rd stage in a Trainwreck is important to get an Express/Liverpool Trainwreck sound so that became my second stage. So that left just one triode for the rest of the preamp.

With only one triode that preamp design choices were a bit limited. It didn’t take long to decide on going with an 18 Watt sort of preamp. So I used a hot biased single 6N2P/12AX7 stage, same as the input stage on the Trainwreck Rocket, and an 18 Watt Lite tone control. The signal then goes to the Trainwreck inspired 10k gain stage and into the LTP PI. The PI is an 18 Watt configuration. The rest of the output section is Trainwreck based. So the design, IMHO, is a pretty good mash up of 18 Watt and Trainwreck.

For controls there is only a Volume, Tone and Presence. It was a pretty easy build, not much more difficult than an 18 Watt Lite or 5E3. The preamp is a single 6N2P, another 6N2P is the phase inverter and the output section is a pair of EL84s. For the power transformer I’m using a Hammond 270DX and the output transformer is a Musical Power Supplies OT15PP.

Here is the schematic. Where a Trainwreck schematic looks like it has some Fender in it, here it’s replaced with 18 Watt Lite much to the dismay of purist everywhere. 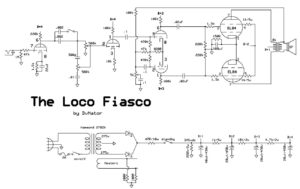 Here are a couple clips:

With a strat and then a tele. I especially like the telecaster sound. Its got good crunch and chime.

With a Les Paul