This is my only amp built in a Valve Junior chassis that has the real Valve Junior cab too! It’s another 4 tuber, two 12AX7s and 2 EL84s. This one started life as my second amp build from scratch (after the Two Stroke) and it’s been through many iterations.

My goal with this latest build was sort of a mini, 18 watt Selmer Treble and Bass…a T&B Jr. Selmers are a bit of an obscure amp, especially on this side of the pond, but I heard some T&B clips on youtube and thought the design looked interesting. It seemed very much like a British take on a Fender Brownface super and just the uniqueness of doing some sort of Selmer amp got me onboard.

This is the schematic I went from. It’s a pretty straightforward amp and I just did the guitar channel. Compared to some of the other amps I’ve built, this one kept pretty close to the source material as far as the preamp goes. It’s pretty much impossible to read the value of the second triode’s cathode bypass cap but based on a few other Selmer schematics I would guess it’s a little .1uF. I put a 2.2uF there for less brightness and more drive. I’m using a split load plate resistor setup on the second triode to lower the gain into the PI as the original’s mixing resistors would do.

I added a switch on the tone stack’s treble cap to switch in a .0047. This really boosts the mids and can be handy for a higher gain sound. The stock tone sack has a fair amount of scoop. When that is engaged I back the treble down some and end up with a really aggressive OD sound.

As far as the rest of the amp goes, the phase inverter is pretty close to the Selmer’s. I reduced the power tube coupling caps from .047 to .02 to tighted the low end a little. Of course, I also added a PPIMV which is handy becasue even though this amp is small, it can get really loud. 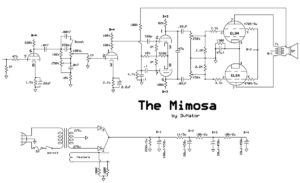 That first 100uF filter cap might be a bit much but it’s what I had on hand.

My power transformer is a WPTGP from Weber. I think these are a good deal. They put out 150ma and can be configured for different voltages depending on the taps you hook up. I hooked it up for 250vdc and incorporated it into a simpler power section with a solid state rectifier. I’m using a Blues Junior output transformer I had lying around. This is an obvious area for improvement but it actually sounds OK in this one. I think they do best in an amp with negative feedback.

One thing I read about these Selmers is how they have chime like a Vox but crunch like a Marshall. After building this I think that description is pretty accurate. I think that behavior might have something to do with the negative feedback implementation. IF you look at the spot in the schematic where you would normally have a presence pot all there is is the .1 cap. So what you have is a presence control that is always up all the way. With this arangement you get the chimy highend of the Vox and the tight and crunch low to mids of a Marshall. 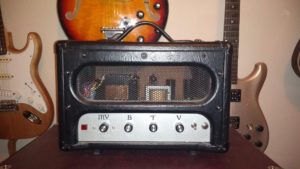