This amp was an attempt to get some of the tone of my Club Dawg in a smaller and simpler package. The Club Dawg has a 5725 tube up front followed by a 6N2P cathode follower then a tonstack. Then there is the other 6N2P triode followed by a LTP phase inverter and a pair of 6V6s. I really like how it turned out.

The tone stack goes into the fist half of a 6N2P and the second half is a
cathodyne PI. I figured the fully bypassed gain stage and cathodyne would get me enough gain to drive the power tubes which are EL84s. the cathodyne has the usual tweaks like a big grid stopper before the PI and big power tube grid stoppers. It’s a little bit like an alternate take on a blackface. I chose EL84 because they drive easier than 6V6s.

Over all it came out pretty well. The pentode > cathode follower > tone stack is a great topology and I’m surprised it’s not used more. 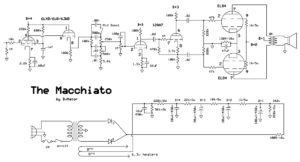 And here is a clip: