This one started when I found an old Washburn VGA15 at the flea market in Sabastopol CA. From what I could tell it looked like it would be a good candidate for a tube conversion. 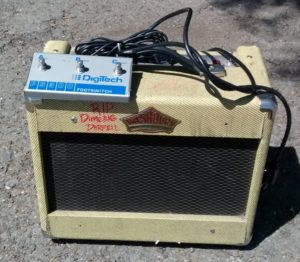 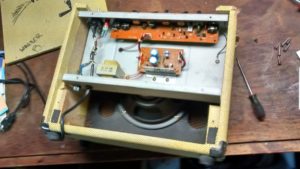 I got it home and started gutting it. Eventually I mounted a Champ eyelet board I had lying around and build the circuit on that.

I used a Weber WRVBPT for the power transaformer that I had around. This is Webers PT for their reverb unit. The OT is a Blues Junior that I got on ebay long ago. Luckily triodes are not particular about the primary Z.

I wanted to try out the 6N6P dual triode as an output section. I like the volume level of it, about the same as a 5W SE amp, but I was never much of a fan of triode output sections. The ECC99 got some good reviews and the 6N6P is basically the Russian version so I was hoping for the best.

After the 5725 there is a volume and tone controls and the signal goes to the first half of a 6N2P. The second 6N2P triode is a cathodyne phase inverter. The phase inverter then drives the 6N6P output tubes.

And I painted it. 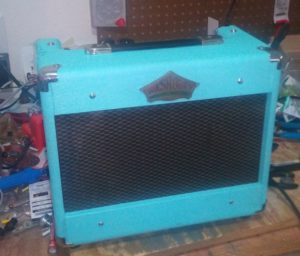 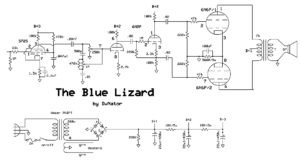 I still prefer the 6F4P as an output tube for this sort of volume level but I think this one sounds pretty good.

Here are a couple clips:
With a strat:

And cranked up with a Les Paul.