Lately I have been listening to a lot of BB King’s Bluesville on Sirius XM. Mostly I was looking for something other than the steady diet of classic rock I had been on the a few months. I started taking note of the guitar tones I liked and found I really liked a lot of the Fender Blackface tones from people like Tommy Castro (home town guy) and Tab Benoit.

After building the Park Rockhead I decided that I had the EL34 tones covered and went about redoing the Eviscerator and turing it into a Super Reverb type amp (head).

Being a Trainwreck type amp it wasn’t to far off of a Blackface configuration.
I didn’t veer too far off of a standard Super Reverb AB763 schematic but I didn’t copy it exactly either.

One obvious difference is I skipped the tremolo. I just was more interested in adding reverb and I didn’t have room in the chassis to add both.
The reverb I did add is different than the Fender one. I’m not using a reverb transformer to drive the tank. Instead I’m using a 12AU7 in a SRPP configuration. This works great with the small, 600 ohm tank I had laying around my garage. Also, unlike the Fender, I added a dwell control. I had an extra hole to fill on the front of the chassis and it really is a nice addition. With the reverb pot it allows you to dial in a nice range of reverb settings. Overall I’m really happy how the reverb turned out and was actually wondering what took me so long to build an amp with reverb.

So there are also some small changes in the preamp to try to beef up the cranked tone a little.
I’m using a 2.2uF bypass cap on the input triode to cut a little bass. I’m also using a 25k audio pot, rather than 10k, for the mid control. Around noon the 25kA pot is close to the 10k linear but as you turn it up you get more of a mid boost.

And speaking of boost, I added a 3 position switch that gives me two different boost settings. In the middle (second) position the boost is not active and it’s the regular blackface tone stack.
In position one it puts a .0047 cap and 470k resistor parallel with the tone stack. This bypasses the tone stack for a boost.
In the third position a 500pF cap is added parallel with the 470k resistor to form a treble peaking circuit like those found in Marshall amps. This one works well with humbuckers to clean out any mud and get a good mid/high emphasis.

The PI input capacitor is a little bigger at .002uF than the stock .001uF and the outout tube coupling caps are a little smaller at .047uF compared the the stock .1uF.

I also installed a negative feedback setup using a presnce pot more like a 5F6A Bassman or a million other amps.

There is a PPIMV that is OK but not as useful as it would be in a Marshall type amp. It’s handy to dial the volume down a little but PPIMVs just don’t work as well with Blackface type circuits.

I’m using an Edcor XPWR005 for the power transformer and a Hot Rod Deluxe replacement output transformer. I found some nice old RCA 6L6GCs in my stash that sound really great in this amp.

Anyway, here is my schematic: 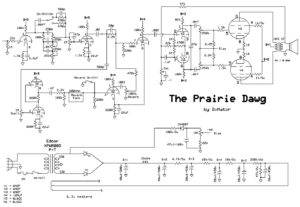 I’ve really enjoyed playing this amp. The clean tone with the reverb is a great combination. 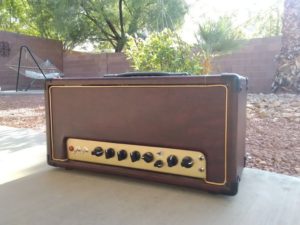