My Carvin x100b to Marshall build is coming along but in the mean time I thoughts I’d do a post about the parallel triodes to cascaded triodes switch I’m putting in it. I’m using a full size switch, not a mini toggle just for ease of soldering. I haven’t seen a switch quite like this one (of course it could be out there and I just missed it) which is different because it allows you to add extra tone shaping components when the triodes are cascaded.

So for this Marshall it’s along the lines of a switchable “one wire” mod but lets you tweak the tone when the triodes are in series. When I looked at the “one wire” mod it just looked like you would end up with a lot more gain but I questioned if the gain would be controllable and useful.

Here is the schematic of the switch: 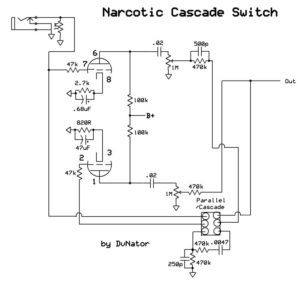 When the switch is in the down position the triodes are in series.
The treble channel enters the middle of the right side and exits the bottom of the right side.
The signal the goes through the .0047 cap and voltage divider. Those are to reduce bass and gain. If this were a JCM800 there would be a 10k cold clipper as the second stage instead of the fully bypassed 820R there which has a ton more gain and bass so these components are used to get things back under control.
The signal then goes into the bottom left of the switch and exits the middle left and into the next triode and the rest of the amp.

I haven’t tried this yet but I was also thinking of a way to use this same basic switch in a 5E3 type amp to be able to go from parallel triodes to cascade triodes with a Fender tone stack in between. It’s a bit more complicated but I think it can be done.