This is a little info about the boost switch I added to my Prairie Dawg amp.

The amp is basically a single channel Fender blackface with SRPP driven reverb. With this amp I wanted to get a blackface sound but also a blackface plus a little more sound.

After messing around with these ideas and I finally remembered the Texas Tea control in the Kendrick Climax. You can see the schematic here.

On the first page you can see there is a .01 coupling cap and 3M pot that bypasses the tone stack. I used that concept as the basis for this boost switch. I reduced the coupling cap to .0047 just because I thought it sounded better. I also replaced the pot with a 470k resistor. I actually used two 470k resistors, one with a 500pF bypass cap, and a On/Off/On switch.

This is the schematic (click for a bigger pic) 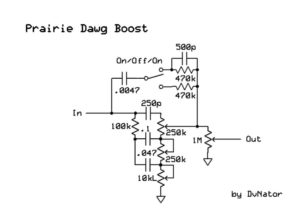