Quite a whie ago I posted my GA-40 lite design on wattkins.com. Others then also build the design and finally a member made a little PCB board for the design. He then sent me one of these boards totry out. however, instead of building another GA-40 lite I built this amp based a slightly on a Supro 1624.

Probably the main reason I chose the Supro is that the board is designed for a paraphase phase inverter which the Supro has, very similar to the GA-40. Pretty much all of the component values in the phase inverter are different but it was easy to adapt.

Overall it’s a fairly simple amp. I was going to do a preamp like the 1624 but I ended up doing something simpler and that could all fit on the PCB.
I’m using a 6N2P paralleled up front. After that I’m doing a take on the high pass filter that is present in the Supro. The Supro has a cap followed by a resistor to ground. I’m doing the same thing but using a pot for he resistor to ground. This turns the high pass filter into a bass control and it works pretty well.

I’m using the 500k volume pot with a 500p bright cap like the Supro along with a simple treble bleed tone control. After that it’s into the supro phase inverter which is where, I believe, the “Supro sound” really comes from. I’m using another 6N2P for the phase inverter.

The power tues are 6P1Ps. They seem to be seldom used in a guitar amp but they are cheap and sound pretty good.

One nice thing about this PCB is the small size. I was able to fit everything in a fairly small chassis. 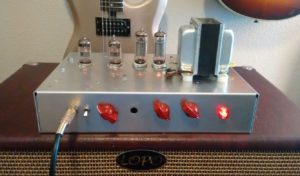 This is the PCB. You can sort of tell it’s been reworked a bit by me… 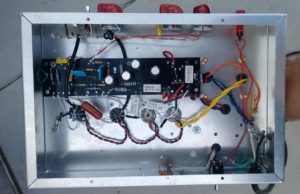 And this is the schematic: 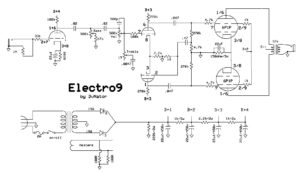 And finally, a clip:

Here is the updated schematic: 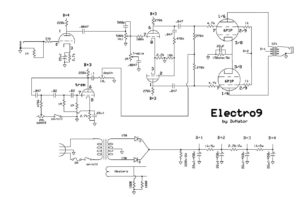