As I’ve probably mentioned before, I’m sort of hooked on garage sales, flea markets and thrift stores. I rarely buy anything because I have a very narrow category of things I’m looking for. One of the things I do look for is solid state guitar amps that can be converted to tubes.

Six months ago at the Alemany flea market in San Francisco I came across a god tube conversion candidate in an old Peavey Studio Pro 40. 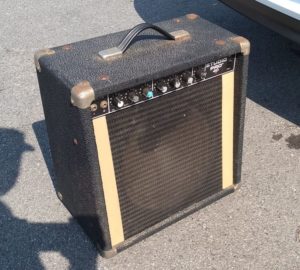 It’s a fairly compact 1×12 combo with room in the back for tubes. 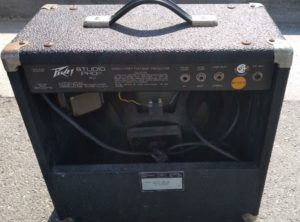 So I bought it for $30. I figure 30 bucks for the amp chassis and cabinet is a really good deal.

I spent a little bit of time opening the chassis up and taking stock on the size and what I could realistically fit in there. I figured 5 tubes would be about tops. 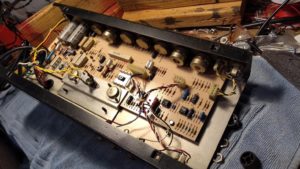 I went back and forth on what exactly to build in there but eventually remembered that I wanted to build something sort of inspired by a trip my wife and I made to Memphis. We had a great time. We did Graceland, Sun Studios, Beale Street etc… At Sun Studios they had an old 5E3 and I thought it would be cool to build something along those lines or something that might have been played in a club on Beale street back in the day. I didn’t have a old Fender tweed type amp like that so it seemed like a good choice.

I decided to go for something sort of like the 5F11 but with a couple tweaks. Instead of the standard Fender tweed tone control I used a slightly modified tone control from the Princeton 5F2 (no A). This is the schematic. This is a really nice sounding tone control but it requires one extra resistor compared to the more common one built off the volume pot so maybe it fell out of favor.

Over the years I have a few things I usually do to a cathodyne PI to make it behave better. On this amp I only added the PI grid stopper because I didn’t want to change the tone too much. For example, there is a reedy, raspy quality to the overdrive that can usually be overcome with bigger (say 47k) power tube grid stoppers but I kept the 1.5ks in there instead.

So here is the schematic: 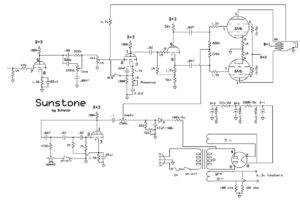 I used the same tremolo I have before that is slower than the usual Fender designs. The tremolo is also the main reason I went with fixed bias rather than cathode bias.

The speaker has since been swapped to an Eminence Swamp Thang since these pictures were taken. 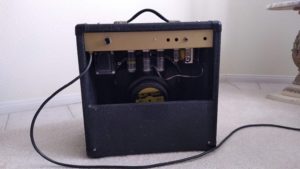 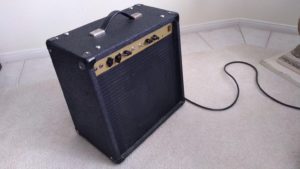 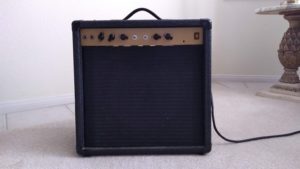 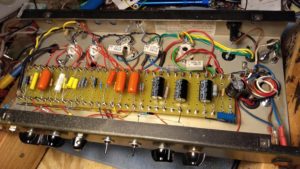 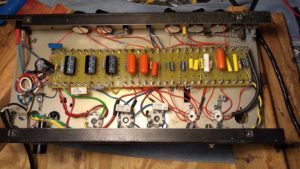 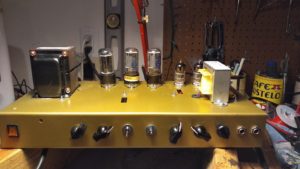 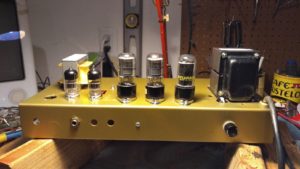