I was recently tweaking my Sunstone amp because it wasn’t quite doing it for me. I had the classic mod with a three position switch on the second triode. This is where you either have the cathode bypassed, not bypassed or not bypassed with negative feedback. The only one I really liked was the bypassed position.

However, like many tweedy, 5E3 type amps the low end got a bit out of control and woofy. I lowered the coupling cap values but I thought it could still be better. Most amps deal with this sort of issue with negative feedback that handles the low end but it will also dull the high end. Of course, you can restore the high end with a presence control. I hadn’t see a presence control in a 5E3 (with a bypassed cathode) so I went about figuring out how to add one.

In single ended amps or amps with a cathodyne phase inverter the NFB is inserted at the cathode of the triode closes to the power tubes. If that cathode is bypassed you would put a small value resistor between the cathode resistor and bypass cap and ground. Like in the vibrochamp…

After a bit of looking I found a couple examples of scaled down NFB and presence controls.
One from a Dumble…

And getting pretty obscure now, I came across this in a 93 Fender Concert schematic…

It uses a fixed 330R resistor rather than a pot.

So as the resistance in these circuits gets smaller the cap size gets bigger so I had a pretty good idea of what I wanted to try.

This is what I came up with based on this research and what parts I had available on my bench. 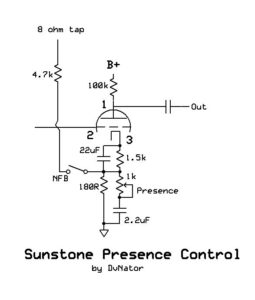 It actually works great. The low end is kept in check but, with the presence turned up there is also a nice high end. The amp is overall a bit quieter but much tighter. The switch lets me go back to normal non-NFB mode.