[sgmb id=1]
The story of the Damocles starts when I picked up a Crate Blue Voodoo combo at a pawn shop about a year ago. The plan had always been to redo it into something good and maybe sell it.

The first step was to convert it to a Dumble sort of thing. I thought that having a hand wired Dumble circuit would make even a Crate something someone would want to buy. I first tried a D’Lite circuit but I didn’t really like it. That led to messing around with various Dumble circuits until I finally came to the conclusion that I’m not really into Dumbles. I’m more of a Trainwreck person. After that II tried various designs but didn’t really come up with anything I liked.

Finally I went with a 2 gain stage black face style channel with the tone stack in between. In addition to that there is a switch that can add two cascaded gain stages with a gain control and tone knob before the black face channel to add a bunch of gain. Where a Dumble amp adds two gain stages after the Fenderish channel, this one put two gain stages before. IMHO you can get way more gain that way. The switch also adds the master volume and alters the tone stack. I haven’t seen this topology used before but it should be. It makes for a very versatile amp.

Since this used to be a Dumble type amp I had some switches available so, of course, I have to come up with something. The Brit/American switch in the tone stack is actually pretty handy. It changes the tone stack from something close to a Blackface type to something close to a Marshall. I’ve found that in OD mode in the American setting you can turn down the mids and get close to that high gain, scooped mids Mesa sound or in Marshall mode you can get a pretty good high gain Marshall sound. I think that somewhat strange topology lends itself to being able to go Marshall or Mesa.

Another good sound is with the tone stack in American mode and switching in the OD circuit with the the OD set to low. With a strat you can get some really nice, just breaking up sounds. With this setting having the tone control on the overdrive comes in handy too.

Here is a comparison of the standard Fender black face tonestack and my tonestack in American mode with the mids dialed down a bit. The green line is the Fender and the red is this amp. Pretty close! 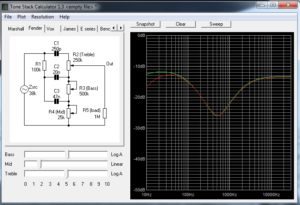 Here is a comparison of the Marshall Plexi tonestack and my tonestack in Brit mode. The green line is the Marshall and the red is this amp. Pretty close but less output because the Marshall uses a cathode follower. 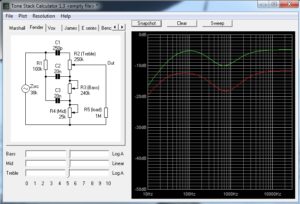 This is a comparison of the Vox tonestack and my tonestack in Brit mode with the mids all the way down. The green line is the Vox and the red is this amp. Sorta close with the mid cut in the same place but the Vox has a wider mid cut and more low end. 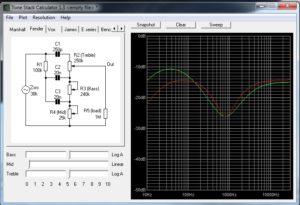 The main thing this switch really does is move the center of the mid cut from about 450Hz for the Fender to about 750Hz for the British sound.

There is also a switch to control the bass. After playing it a little in the high gain mode I was hearing some strange artifacts in the low end. So I added a switch to reduce the cathode bypass cap on the last gain stage.

I’m also running EL34’s in it now. They have a great crunch and seem to emphasize the mids in this circuit.

Here is the schematic… 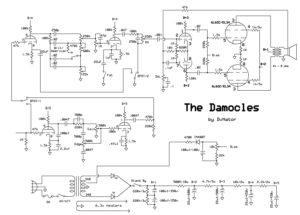 Here is a gut shot. It could be cleaner but not too bad considering how much experimenting went in to this one (and that is started out as a Crate Blue Voodoo).

And, finally, here’s a clip. It starts clean and then switches in to overdrive mode.