The Park Rockhead is an amp and schematic I had my eye on for years.

For those that are not familiar with Park, in the 60’s and 70’s it was a line of amps that Marshall designed and built to get around a distribution deal they had made for the Marshall line. Many Park amps were very similar, if not exactly the same, as Marshall amps built at the same time. Park eventually had some unique models and the Rockhead was one of those unique designs.

I was interested in this design because, looking at the schematic, I could see some JCM800 and even some Trainwreck in there (the first two triodes biased normally and the 3rd being a 10k cold biased stage).
In researching the Rockhead online it is often compared to the JCM800 and the general take is the Rockhead came before the JCM800. This is sort of true and sort of not. The Rockhead was introduced in 1979 or 80. The schematic is dated January 1980. The JCM800 came out in 1981 but the basic JCM800 2203 circuit came out years earlier in 1975.

The drawback about building an amp from the Park schematic is that there are parts of it that are pretty diffucult to read. For example, it looks like there is a second bright cap on the second volume pot but I can’t really make it out. 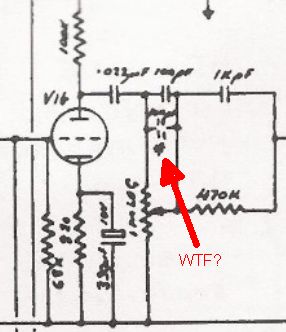 It might be another 100pF cap but I ended up just leaving it off. The amp turned out bright enough.

There are a bunch of places where I didn’t follow the schematic.
One is the master volume. The Rockhead might be the first production amp that came stock with a post phase inverter master volume. It uses two sets of coupling caps, one before the dual pots and one after. I simplified and eliminated the second set of caps. This MV works great BTW. I didn’t have a choke so I’m using a 500R 10 watt resistor. Also, I didn’t see any voltages on the Park schematic but I’m guessing my 300v PT gets me at least 50vdc less plate voltage than what a real 1210 would have. There are other differences but these are some of the more notable ones.

Probably the biggest change, sound-wise is the high gain input. In the Park schematic it looks like the volume pot has two .002(2kpF) bright caps for a total .004uF(4kpF). 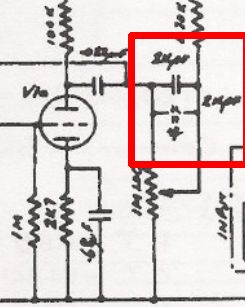 There are a bunch of Marshall amps that use a similarly big .005uF bright cap on the volume pot so it’s not totally out of the ordinary. With a cap that is so large however, it also adds a bunch of gain and boosts the mids quite a bit. In the Park the volume pot arrangement is followed by a 470k/68k voltage divider that then throws away a bunch of gain.

I was not really happy with the sound. It was too mid heavy for me. After messing with it for a while I ended up going in a more traditional Marshall direction as well as simplifying the design. I got rid of the bright cap and voltage divider altogether and just added a 500pF/470k treble peaker circuit. I lost some gain by not having the big cap on the volume pot but added gain by removing the voltage divider. I like this arrangement much better.

This clip is the gain channel, all four triodes, with a Les Paul. I’m noodling for a while with the gain about half way up (both volume pots).

This is the gain channel again with more gain, both volume pots are at about 2 or 3 o’clock.

I also went way off the reservation when it came to the clean “channel”. The original park had a footswitch to either go into the bright input, which then goes into the normal input, or to skip the bright input and go directly into the normal input. I knew I wasn’t going to do a footswitch so I did the switch on the amp to do more or less the same thing. It worked OK but I didn’t really like the sound going directly into the normal input, it had a flubby sound that I didn’t like. After a bit of experimentation I came up with switch to bypass the second stage and go directly into the bright input. The switch also biases the last gain stage hotter in the clean mode. I think this improves the clean tone and makes up for some of the volume differences compared to the gain mode with it’s extra triode. This is very much like the brilliant channel on the Marshall 2150. From what I’ve read the Marshall 2150 is a sort of watered down version of the Rockhead. Anyway, I really like the way the clean channel came out. It can actually get pretty dirty itself and has a nice chime to it.

This is the clean channel with a telecaster.

It’s built in some sort of blackface chassis I got from Weber years ago and never used. The cabinet came from a thrift store in Kingman AZ. There are a bunch of thrif stores there but this one was in an old theater and loaded with crap. I found half of an old Silvertone amp there but they wouldn’t sell it to me. As a consolation I got this empty cabinet.

The power transformer is an Antek AS-2T300 and the output transformer is from an amp from the 80’s called the Nomad. From what I understand it was started by a couple former Boogie employees in Berkeley CA.

Here is my version of the schematic: 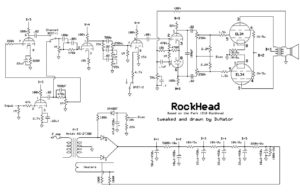 Add here it is in it’s cobbled together glory: 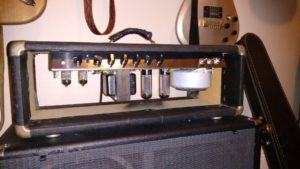 Here is a gut shot. I could of used a bigger chassis. It’s pretty jammed packed in there. 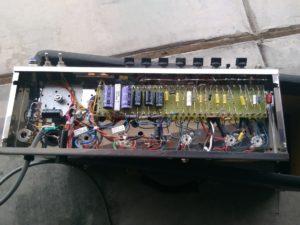 Anti-Pop Update:
I’m really happy with this amp but the thing that bugged me a little was that when you threw the switch there was a pop when the bias on the last triode changed (the 4.7k cathode resistor is put in parallel with the 15k). With the help of the folks at wattkins.com I added a anti-pop circuit using a MOSFET. It uses voltage from the top of the presence pot to activate a MOSFET switch which is slower and doesn’t cause the abrupt pop creating bias shift. There is still a little switch noise but it is much better.

This is the schematic with the anti-pop switch and some other tweaks: 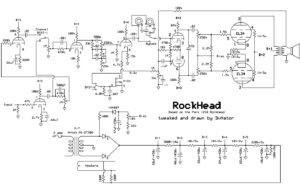