I’m calling it the GA-40 Lite as it’s basic design is based on/inspired by the Gibson GA-40. The amp is single channel with no tremolo.

It’s a very basic design. For controls there is just a volume put and a simple treble bleed tone control. While I was building it I was noticing how few parts make up this amp but it’s still really nice sounding. Definitely a less is more thing going on.

The PT is a Hammond 261G6. I sort of miscalculated or misunderstood the rating on it. From the product information I got that it was 250v center tapped with 130ma.
http://www.hammondmfg.com/261.htm
I was thinking I would just use a couple diodes and use the center tap. However each leg turned out to be about 135v (probably a bit above 125v because it has a 115v primary) so after the rectifier I was only getting about 185vdc.

I noticed that the documentation mentioned using it with the full wave bridge so I did that. I tapped off the center tap that got me in the ball park. Anyway, after some messing with the power rail and using a 150R sag resistor, I ended up with about 329 on the plates and 280 on the screens.
The output transformer is from a Fender Deluxe. 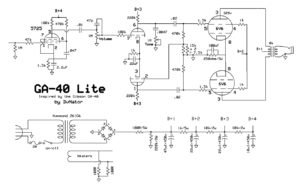 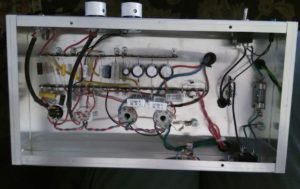 Here is a layout: 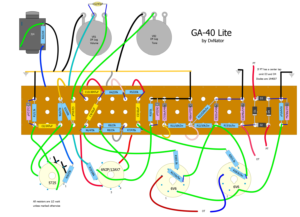 Note: This layout does not include the sag resistor and the power supply is a bit different to improve the grounding scheme.

Here is a clip, just cranked up with a Les Paul.