This one is a conversion of my old Carvin X100B to a Marshall Plexi type amp.

I got this Carvin head, probably almost 30 years ago, at the Starving Musician in Santa Clara, CA. I was looking for a tube amp I could afford and the clean sound on this sold me. Also the price, 200 hundred bucks, fit my budget.
I used this head, along with a very early Avatar 2×12 cabinet loaded with Celestion G12M-70s when I was playing around the SF bay area in the 90s.

In the mean time the head has spent a lot of time under my bench. Since I started building amps I had it in my head I would convert it to a Marshall, mostly just on account of how it looks.
I finally got around to it.

I used a JCM800 eyelet board, father than my usual universal turret board, because I wanted to make this a little more of a “legit” conversion. Even though the cab is fairly huge the chassis is smaller and, since this was a PCB, the way the transformers are situated actually made fitting everything in a little bit tight.

I used 3 cap cans for the filter caps and put two under the eyelet board. The other is attached to the inside front of the chassis. A lot of the other wiring is left over from the X100B like the OT/output jacks and the PT/power switch. 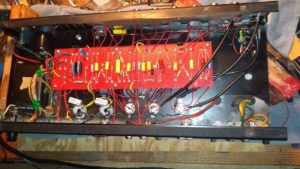 For the circuit I tried to keep the basic Plexi sound but went a little off the rails in two main areas.

The first thing is the parallel/cascade switch.
I had this idea for the switch for a while but never implemented it. I did a separate write-up about the switch here. In a nutshell, the thing I like about this switch is it lets you add some extra components when the amp is in cascade mode and lets me tailor the higher gain sound without affecting the parallel mode. Instead of one triode just slamming into the next I added a smaller coupling cap, a voltage divider and small cap to ground to trim the highs.

I’m really happy with the tone of the cascade mode. It’s not super high gain but it’s more in the Van Halen, AD/DC overdrive level ball park. It also doesn’t have the “chainsaw” type tone some JCM800 type amps sometimes get. It has a softer edge to it without the cold clipper stage. (I love JCM800s too BTW) .

The other area I went off the beaten path is the second preamp tube. Normally in a Plexi type amp (built by a sane person) the second tube would be a triode and a cathode follower. I decided to try something different and use both triodes as a gain stage for each channel and use an anode mixer with a MOSFET source follower.
I did this because any interaction between channels really annoys me. I know there might not be much when using mixing resistors but there is some. Doing this also let’s me add the .68uF bypass cap to just the bright channel. Hiwatts do something similar minus the MOSFET.

A couple other tweaks….
I used a 1.5k cathode resistor on the normal channel instead of a 820R to get more of a JTM45 sound there.
Also added a PPIMV to control the overall volume level.

I’m adding the passive effect loop to almost everything I build these days and use it with my external tube buffered effect loop. 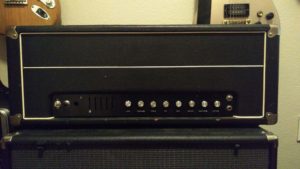 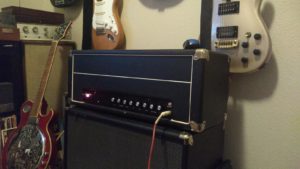