This post is about the high low input setup in my Nervosa amp.

I was building a tweed bassman type amp but wanted to have an option for adding an extra triode infront of the normal preamp. However, I wanted to do it with an extra input jack, not a switch. I looked at the setup in a JCM800 which basically does that but I didn’t like how the low input went right to a volume pot and then to the cold biased 10k stage. I wanted a way to alter the circuit based on something being plugged in (or not plugged in) to the input jacks.

After looking around a bit the switchcraft 14B seemed to fit the bill. The 14B an extra switch on it that I could use to connect or disconnect something from ground. If nothing is plugged into it this switch is closed to ground. So, using this jack in a JCM800 type amp, it’s possible to change the cathode resistor on one of the triodes. In this case, the cold clipper. 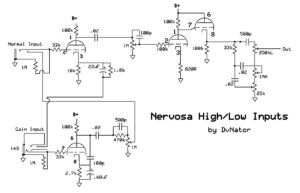 The way it works is if you plug into the normal input and nothing is plugged into the gain input, which uses the switchcraft 14B jack, the 1.8k/22uF is connected to ground, parallel with the 10k cathode resistor, on the “normal” input triode. So the normal input is now 1.5k/22uF, basically like a JTM45. You could instead put a .68uF and a 3.6k resistor in parallel with the 10k to get 2.7k/.68uF.

If the guitar is plugged into the gain input the 1.8k/22uF is disconnected from ground and the normal input triode is now biased with just the 10k cathode resistor. The gain triode then cascades into the normal triode through a switched jack on the normal input. This produces something more like the JCM800 topology.