This is another low watt amp, probably about 4 watts, using 6F4P (Russian ECL84, 6DX8 equivalent) power tubes. With these 6F4P amps I’m always trying to get big amp, pentode power tube overdrive sound at volume levels that are more like triode (12AU7, ECC99) output levels. This one got started with the goal of making a design that was fairly simple and straightforward.

From previous amps like this I decided to go with a cathodyne phase inverter as I think it works well with tubes that overdrive easily. For me it was a no brainer to use one of the 6F4P triodes as the PI. I use some tweaks that make the cathodyne PI sound pretty good.

I initially based the basic design of the amp on one developed on PPWatt.com called the Special which is a sort of tweaked 5E3. It uses a paralleled first 12AX7 up front, another gain stage and then a tweaked cathodyne PI. I followed the same basic layout using a paralleled 6N2P upfront, the next gain stage was one of the 6F4P triodes followed by another 6F4P triode as the PI.

I built the amp in this bud box. It a little flimsy compared to a normal amp chassis but it doesn’t cost very much and with the little transformers these tubes require it works well.

I ran into some oscillation problems when I first got it fired up. I eventually tracked it down to a grid stopper I had leading from the volume pot to the next triode. I removed the grid stopper and the oscillations went away. To be honest, I don’t understand why the grid stopper caused the issue in the first place but I just moved on.

Once I had the kinks worked out I went about tweaking the thing. Sometimes with these tubes I hear a sound or tone that just doesn’t sound right and I heard that with this one. It’s a sort of grainy sound. I tried to really listen to it and came to the conclusion that I was hearing intermodulation distortion. I believe there were out of tune harmonics that became especially prominent when playing chords while the amp was just breaking up.

I did some research regarding intermodulation distortion and came across a few ways to combat it.
One thing is cutting the bass early. This made me rethink the preamp. Instead of having the paralleled 6N2P upfront producing a fat sound I thought it would be better to cut the bass with the first triode then add bass later in the circuit.

Another thing was to increase filtering. So based on that I increased the size of the filter caps.

One other thing was to add negative feedback. In previous 6F4P amps I often added NFB so I went with that here to.

After all these changes I did notice a good improvement. The last thing I did was stop using one of the 6F4P triodes as a gain stage. I think they sound OK but probably not as good as a 6N2P triode. So now I had the two 6N2P triodes cascaded (with an 18 watt volume/tone control in between) into a 6F4P triode as the PI. Once I went with just the 6N2Ps as gain stages it was sounding pretty good!

With the cutting of bass up front I thought the over all bass in the amp was a bit lacking. To get more bass I went with a NFB trick. I basically added a resonance control but tweaked it to be more like a bass knob. I used a .002 cap instread of the usual .0047. The resonance control lets you adjust how much low end the NFB will effect. By cutting the amount of low end fed back you can get a perceived low end boost. I used this same sort of thing on the TMC1.

Anyway, I’m happy with how this came out. It has good tones all around the volume pot and works well with multiple types of guitars.

So here is the schematic: 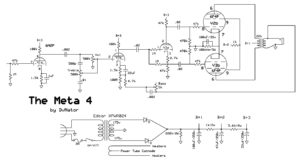 And a couple clips: