I go to thrift stores more often than the average person I would guess. The problem is I never find what I’m looking for which is a tube amp obviously. Because of my dismal success rate I decided the next best thing was finding a solid state amp that I could convert to a tube amp. Even these don’t come along to often but one day I walked into my local thrift store and found a Crate GT1200H head sitting on a Ibanez 4×12 cabinet.

I did a quick look at the Crate and decided it would be a good candidate for a tube conversion based on how the chassis is in the cab, plenty of room. The Ibanez speaker cab was another story. It was pretty beat up, HUGE and was just not something I needed. They were asking $55 for both but the lady there was nice enough to sell me the head alone for $25.

I took it home and tried it out and it worked fine and, actually, didn’t sound bad. It had a decent clean sound and could do a really high gain sound pretty well. I thought the in between sound, dirty and just at the edge of breakup to moderate distortion is where it was not that great. To be honest I don’t know what it would have had to do to keep me from ripping out the PCB.

I was just not sure what sort of tube amp to build in it. My first inclination was an amp inspired by those EL34 Matchless amps like the Chieftain. I worked on a few schematics but never really got motivated to start on it.

I had been on a Fender amp kick for a while and at some point I remembered this video.

The guy has a couple 5F6A Bassmans and he spends a good deal of time talking about the tone stack and how it is different than the tone stack in the schematic. He explains that the Bassman he has, as well as what’s used in the Fender Bassman reissue, uses a 100k slope resistor and a .1 bass cap. These values are 56k and .02 in the original schematic.
This topic is also discussed here. It seems like many, if not the majority, of 5F6A Bassmans came with the 100k slope resistor and .1 bass cap.

You can see in the Duncan’s tone stack calculator the difference between the two tone stacks. 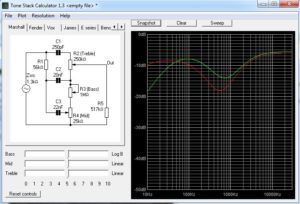 The red is the 100k/.1 bass cap and you can see it cuts some of the lower mids compared to the green line that’s the 56k/.02 bass cap version.

I thought this was interesting and thought it would be cool to be able to switch between the two tone stacks. This was the sort of thing that gets me interested enough in an amp to start building.

Besides the tone stack I also wanted to do something other than the normal two channel inputs. I wanted to have a higher gain option but didn’t want to do switches. I wanted a “normal” input and a higher gain one and they both needed to sound good (obviously).
So I started thinking about how it would need to work. I know there is a “one wire mod” but I was sceptical that would really produce the sound I was after. So I looked into input jacks that could also effect some sort of change to the circuit. The switchcraft 14B seemed to fit the bill. There is an extra switch on it that I could use to connect or disconnect something from ground. So I worked out using that to rebias a triode from using a 4.7k cathode resistor bypassed with a .47uF cap to 1.5k/22uF by putting 2.2k/22uF in parallel.

The way it works is if you plug into the normal input and nothing is plugged into the gain input, which uses the switchcraft 14B jack, the 2.2k/22uF is connected to ground, parallel with the 4.7k cathode resistor bypassed with a .47uF cap, on the “normal” input triode. So the normal input is now 1.5k/22uF and it works basically like stock.
If the guitar is plugged into the gain input the 2.2k/22uF is disconnected from ground and the normal input triode is now biased with just the 4.7k cathode resistor bypassed with a .47uF cap. The gain triode then cascades into the normal triode through a switched jack on the normal input. This produces something more like a modded JCM800 topology. I could have made the gain triode closer to a JCM800, with a 2.7k/.68uF cathode for example, but I wanted to keep it a bit more Fendery.

The rest of the amp has a few more changes compared to a tweed Bassman. I’m using a solid state rectifier and simplified the bias supply.
The OT is a MPS OT40PP and the PT is an Antek AS-2T300. I have just under 400v on the plates so I figure I might try 6V6s in there at some point. The plate voltage is about what the 5F8A twin, a very similar amp, runs. It has a pair of Carvin branded 6L6GCs in there now. Those came with my X100B back in the day.

I’m using some boards, designed by a member at wattkins.com, that turned out to be really easy to work with. They are a PCB that uses large holes to mimic eyelets on a PCB. The layout is basically the same as regular 5F6A eyelet boards but they have many traces built in to simplify the build process. I didn’t do a straight Fender 5F6A so I needed to get a little creative at spots but it was still very easy to make my circuit work.

Anyway, I think it turned out to be a really good blues or rock amp. It covers a good deal of ground very nicely. I found the tone stack switch is handy for cutting some mud out when the amp is really cranked, especially when using a strat neck pickup.

And this is a demo video:

In this video, the gain channel uses a 10k caothode resistor on the second triode so there is a bit less gain that it has now. 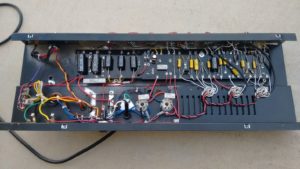 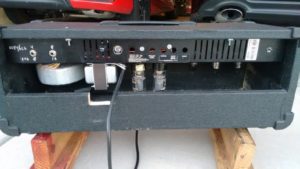 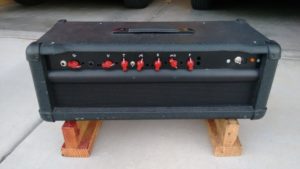 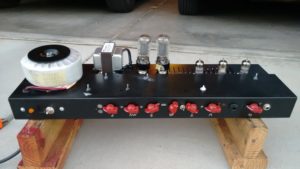