Years ago I was building amps in Value Junior chassis for some reason. Many turned out to be pretty good sounding even if they weren’t much to look at. There was this one that I had redone countless times. It had been a single ended amp, a push pull amp with 6F4P power tubes and all sorts of other things but I had never been totally happy with it.

At some point I decided that I hadn’t done a simple 6V6, LTP phase inverter, 4 tube amp and I would build that amp in the valve junior chassis I never was happy with. So that’s how this one got started.

I tried a few different things but I ran into the problem of two cascaded gain stages into a LTP then 6V6s results in too much gain. I tried putting a tone stack between the two stages but that didn’t really do it for me either. One thing that was working against me also was the less than top shelf parts, like transformers, I was using. I tried a bunch of things but nothing really grabbed me.

Finally I thought of the Fender 6G3 Deluxe. It’s a pretty basic design so I liked that but I also hoped it would work well with the transformers I was using. I simplified the design by removing one of the channels and removing the tremolo. I got that wired up in this value junior chassis and after playing it a bit I was thinking that I was on the right track.

I originally tried to outsmart Fender in a couple places. The 6G3 uses a split load plate resistor on the last triode before the PI to reduce gain. I thought it was odd that they do that but also had a cathode bypass cap on that last triode. I tried leaving the bypass cap off, not using the split load plate and did various other things to get the gain right. Eventually I gave up and went with the Fender configuration and things were good again..

There are a couple things I did change.The 6G3 uses 220k plate resistors on the input triodes and a shared 1.5k fully bypassed cathode resistor. The shared cathode resistor works out to 3k for each triode. I did a single channel input with the 220k and a 2.7k/22uf on the cathode. Eventually I changed that to the more classic Fender 1.5k/22uF with a 100k plate resistor. This lowers the gain a bit but I think it adds a bit more sparkle. The original uses 220k mixing resistors after the first stage and they form a voltage divider. I also put a voltage divider there but using 100k in series hoping for better highs (less miller effect).
The 6G3 is fixed bias but I’m doing cathode bias more like a 5E3. The PT I’m using makes fixed bias a sort of pain and I wanted to keep this amp simple.

One kinda of big change or mod is the addition of a bass control.I’m using smaller coupling caps after the PI and I added a bass control before the PI to further dial I the right amount of low end. The bass control comes from the Marshall Studio 15. The control is basically a cap and a resistor in series with a pot wired as a variable resistor that creates an adjustable high pass filter. We, or I, usually think about adjusting bass by changing coupling caps but the coupling caps work with some sort of resistance to create a high pass filter. The caps values I’m using are larger than in the Marshall to get closer to what’s in the spot on a 6G3 but it works pretty well and I think it’s a handy mod.

After thinking about it a little I think the Fender 6G3 Deluxe is the closest thing to a mini 6V6 tweed Bassman (or JTM45 for that matter) that was produced back in the day. First off it has the two cascading gain stages going into a LTP inverter with NFB like those bigger amps. Also, where the 5F6A bassman has a gain reducing tone stack, the 6G3 has the split plate load which, like the tone stack, reduces gain going into the PI. So the gain structure is similar. Feel free to disagree but I think the Brown Deluxe is closer to a mini Marshall “Plexi” than a what we refer to as an 18 watt these days.

So here’s the schematic: 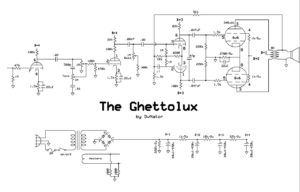 And here’s a clip, just some cranked up noodling with a Les Paul.