Since you can never have enough Trainwreck based amps I decided to build a low-ish power Trainwreck that ended up a sort of combination of Express and Liverpool.

When I started working on the schematic I started taking some bits from the Liverpool and some from the Express in an attempt to get the sound I was after.
Starting at the begining of the circuit, I went with the Liverpool tone stack because I like the mid scoop. I used a similar tone stack in the TMC1 and always liked it. The Express tone stack has really no scoop to it.

The other reason the Liverpool tone stack worked for me was that I was planning on using the split plate resistor switch on the second triode. I knew I would be able to get a decent Blackface tone with a tone stack with some mid scoop in it. I implemented the switch using two different size coupling caps and by using a larger one for the low gain setting I get a nice round tone and a smaller one for the high gain setting to keep things tight.

That brings us to the phase inverted which is actually close to an 18 watt. To me, it lands sort of in between the Express PI and the Liverpool as far as how hot it’s biased. With a 820R bias resistor it’s not as hot as the Express (470R) and not as cold as the Liverpool(1k).
.
After the phase inverter I added a master volume. It’s the type with a 250k dual pot and 2.2M resistors from the wipers to ground. This really helps make the amp more livable since being able to crank the amp down just a few notches can be the difference between ears bleeding and ears ringing. I’ve actually found you can turn it down pretty far and it still sounds good.

The output section is also a cross between Express and Liverpool. I had bought the power transformer, an Antek AS-1T250 with the intention of doing a two hole Liverpool with two cathode biased EL84s. Its a 250v unit that was very affordable and I thought it would be perfect. I’ve used Antek toroidal transformers in a few amps now with good results. Some where along the line that plan went off the track and I decided to go with 6V6s instead. I guess I thought 6V6s would be easier to deal than EL84s with in a Trainwreck circuit where the power tubes really get pounded. So I went with 6V6s and did them fixed biased, like an Express, but closer to Liverpool voltages.

The output transformer is an older OT20PP from MPS that I’ve had laying around my garage for a while. I’s wired up for an 8k primary.

Here is the demo: 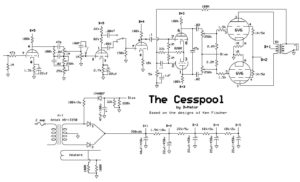 I came out well. It is a sort of beast as it should be. With the master volume all the way up you can get nice feedback almost on command. It’s touch sensitive and is just generally responsive. If you’re not paying well you’ll know it with this amp. 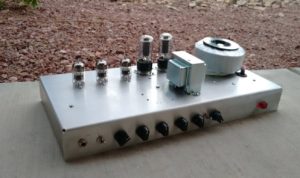 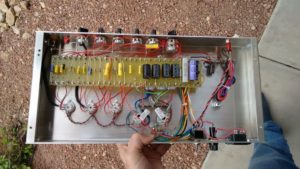 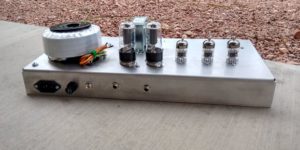 Jack, I know what it’s called but no, don’t even think about it…