This is an update to the first amp I built, the Two Stroke.

I went ahead and added another 12AX7 and rewired it into a single ended Trainwreck type circuit. It’s still using the Fender H.O.T chassis.

I changed the two existing gain stages to be like the first 2 stages on a wreck and added a blackface tone stack (Not exactly a Trainwreck stack. Again, I was using parts I happen to have around my bench.) along with the 2 position bright switch. I also added another switch to remove the bright switch completely from the circuit.

Then I added the extra gain stage with the 10k cathode resistor between the existing preamp and the power tube. I used component values some where in between the Derailment and another SE Trainwreck schematic I found at the Amp Garage.

It’s not in the picture but I recently tried an EL34 in it and it screams. Way loud but in a good way.

Being one who can’t leave well enough alone I decided to rewire this amp.

I had been reading a few threads at the Ampgarage and SEwatt about the Dirty Little Monster. This is a single ended amp that Ken Fischer designed. In the Dave Hunter Tube Amp book Ken Fischer says that Dr. Z built a couple for Joe Walsh using his design.

It seems very few folks have even heard it let alone seen the schematic. From the few threads scattered across the internet I’ve gathered that it seems to be a Marshall preamp attached to a large power tube, a 6550a or EL34. In one of Gerald Weber’s books Ken mentioned his Champ that has a hot Marshall preamp, a presence control, master volume and a 6550a power tube. One poster on the Ampgarage who saw the schematic sort of verified that the preamp is not a Trainwreck Express or Rocket but more of a JCM800. In this old thread there is also mention that the DLM is a completely different circuit than an Express.

We also know that the controls are Gain, Treble, Bass, Master Volume , Slope and Presence.

This is a review of someone who played one.

So based on this little information I went about rewiring my poor Two Stroke again.

This is the schematic I came up with.

NOTE: I have not seen the real schematic or even heard a clip of a real Dirty Little Monster.

For much of the rest of the amp I looked at other amps Ken Fischer designed, borrowed a little from them and put it together in what I consider a JMC800 sort of preamp. For example, the 2.7k/.68uf first stage cathode resistor and bypass cap is in the Komet as well as Marshalls. Ken Fischer also used the 1.5k/22uf combo in various designs. The power supply is sort of a modified Champ.

If you look at the schematic I did, the deal on the master volume pot is based on the review of the person who played one. He talks about a pot that affects the treble bleed only when the master is being used. I’m going with that as the presence control. It’s sort of cool because you can dial some highs back in when you turn the master down. This is just a guess on how the real thing might work.

I didn’t do a slope knob but a slope switch.

It’s running a 6L6 in the clip but I might switch to a 6V6 to bring the volume down some. It’s pretty loud as is.

I changed the look a little too. 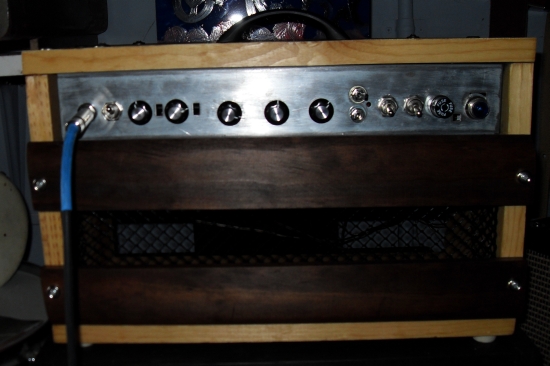 Just to be clear, I have not seen the real DLM schematic or heard the actuall amp. This was just an interesting experiement. There’s a strong likelihood that I’m miles off the real thing with this design but it sounds pretty good anyway if I do say so myself.