I’ve finally got back to soldering and I’m messing with a circuit that’s part Trainwreck and part 18 Watt Lite and likely offends fans of both. I sort of took out the Fender part of a Trainwreck circuit and substituted the first gain stage and tone control from an 18 Watt Lite. It’s a really simple circuit and it’s got a fair amount of gain. I’m liking it so far. It’s like a extra aggressive 18 Watt. It’s called the Loco Fiasco.

I’m still working on it but here’s the schematic so far: 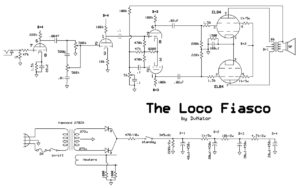