I’m finally getting around to converting my old Carvin X100B to a Marshall.
Back in my younger days I played this Carvin amp in clubs around the San Francisco bay area. This was before I got really interested in amps and I did what most people do with X100Bs.
I avoided the dirty channel and just used the clean channel with pedals.

I later tried modding it but that wasn’t really an improvement. At some point I pulled out the PCB but that’s as far as I got.

Later on my wife got me some cap cans, the eyelet board as a birthday present (I gave her a hint of what I might want…).

I’m finally getting going on it. I have a couple ideas I want to try out so it will veer from a typical plexi in a few ways but, hopefully keep the basic plexi sound. 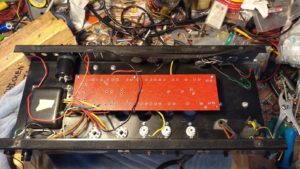 Anyway, Ralph used one and defeated Steve Vai with it but I still think a Marshall would be cool.