Some discussion came up on wattkins.com about tweed bassmans and that sort of pushed, overdriven sound some players get with them.
I had built this bassman sort of amp and decided to see if I could get that tone.
This, eventually, lead me down a path of tweaking the gain channel of the Nervosa a little bit more.

It seemed many people who use bassmans drive the front end with a pedal, not set for a lot of gain but to just drive it harder. So I tried a pedal into the normal input on the Nervosa and I could tell there was something to this.

I went in a slightly different direction and instead of a pedal I used the cascade mode, basically substituting the extra triode for the pedal.
I ended up turning the gain and master way up but turning the second volume down. This was a really cool sound! It had a big clear overdiven tone with a strat neck pickup.
The issue was the amp became super bright. I had a Marshall treble peaking circuit in there and a little .1uF cap on the middle triode when the amp is in cascade mode.
So the tweaks I did where to put that treble peaking circuit on a switch and to increase the .1 bypass cap to .47uF.

These two things really did the trick. I can turn off the treble peaking when I need to and the bigger bypass cap fattens up the tone nicely. Even when the amp is dialed in for more of a saturated tone it sounds better.

Here is the updated schematic: 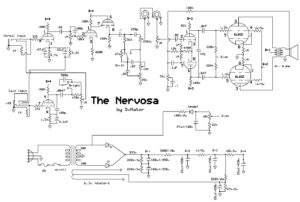