This is a switch I came up with when I wanted to add some sort of clean option to my Bedlam amp which is a Soldano SLO type circuit. I also used it in the JCM-SL3. 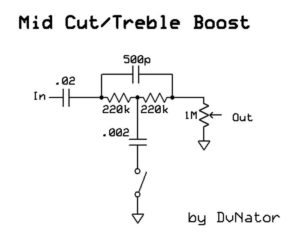 You might have seen a treble peaking circuit found in lots of Marshall amps. That circuit is just a 470k resistor bypassed with a 500pF cap. You can see it in the JCM800 schematic. It’s R5 and C4 over the preamp volume pot.
The peaking circuit can be good for adding that Marshall mid/high emphasis to the amp.

So this switch puts those two circuits together and lets you change between the treble peaking circuit and the bridged-T mid cut.

I split the 470k resistor from the treble peaking circuit into two 220k resistors in series. That doesn’t quit add up to 470k but it’s close. The junction of the two 220k resistors goes through a .002uF cap to one side of an on/off switch. I recommend using a cap between .002 and .0047 for the best results. The Gibson GA-19 linked above uses a .003. The other side of the switch goes to ground. When the cap is connected to ground creates a bridged-T mid cut circuit for a scooped mid that works great for clean tones.

When the cap is lifted from ground it’s more or less the standard Marshall treble peaking circuit (440k instead of 470k but odds are no one could tell the difference).