It took about 4 years but I finally did a clip of a stand alone spring reverb unit I built in a baking pan.

It’s modeled on the Fender 6G15 but uses a 6SN7 configured as a SRPP to drive the tank. There is no output transformer like the Fender.

When I opened it up after 4 years I don’t know what I was thinking about the layout. It’s probably strange because it had been tweaked and changed around a bunch. It could stand to be redone but I’m not that motivated at the moment. It might be a little quieter with a better layout. 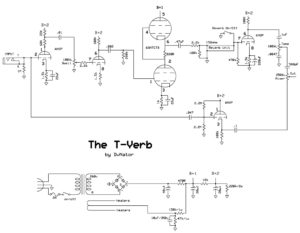 I previously had a 6N1P in as the input but I tried a 6N2P and liked it better. Also much cheaper.

This is the clip: